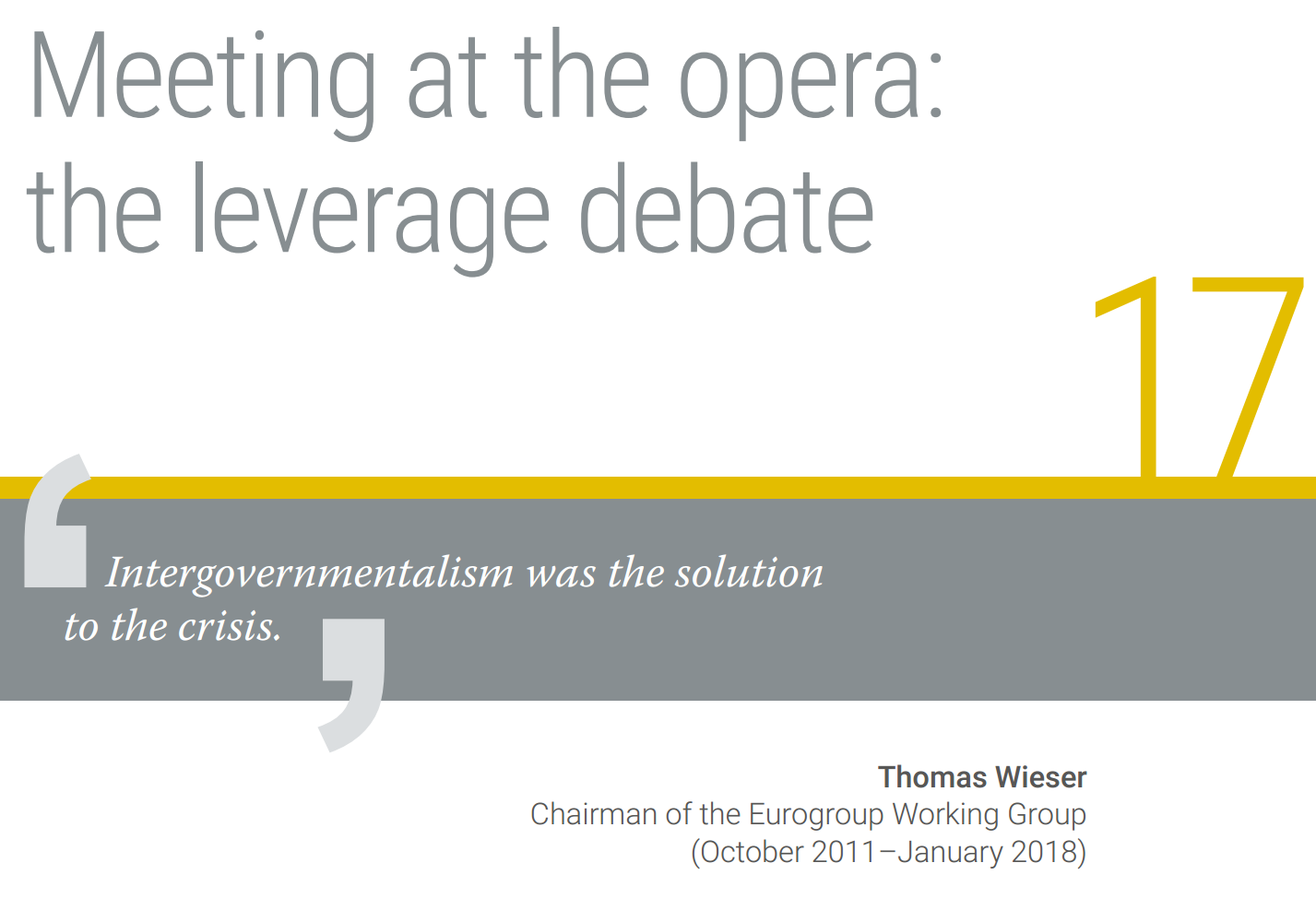 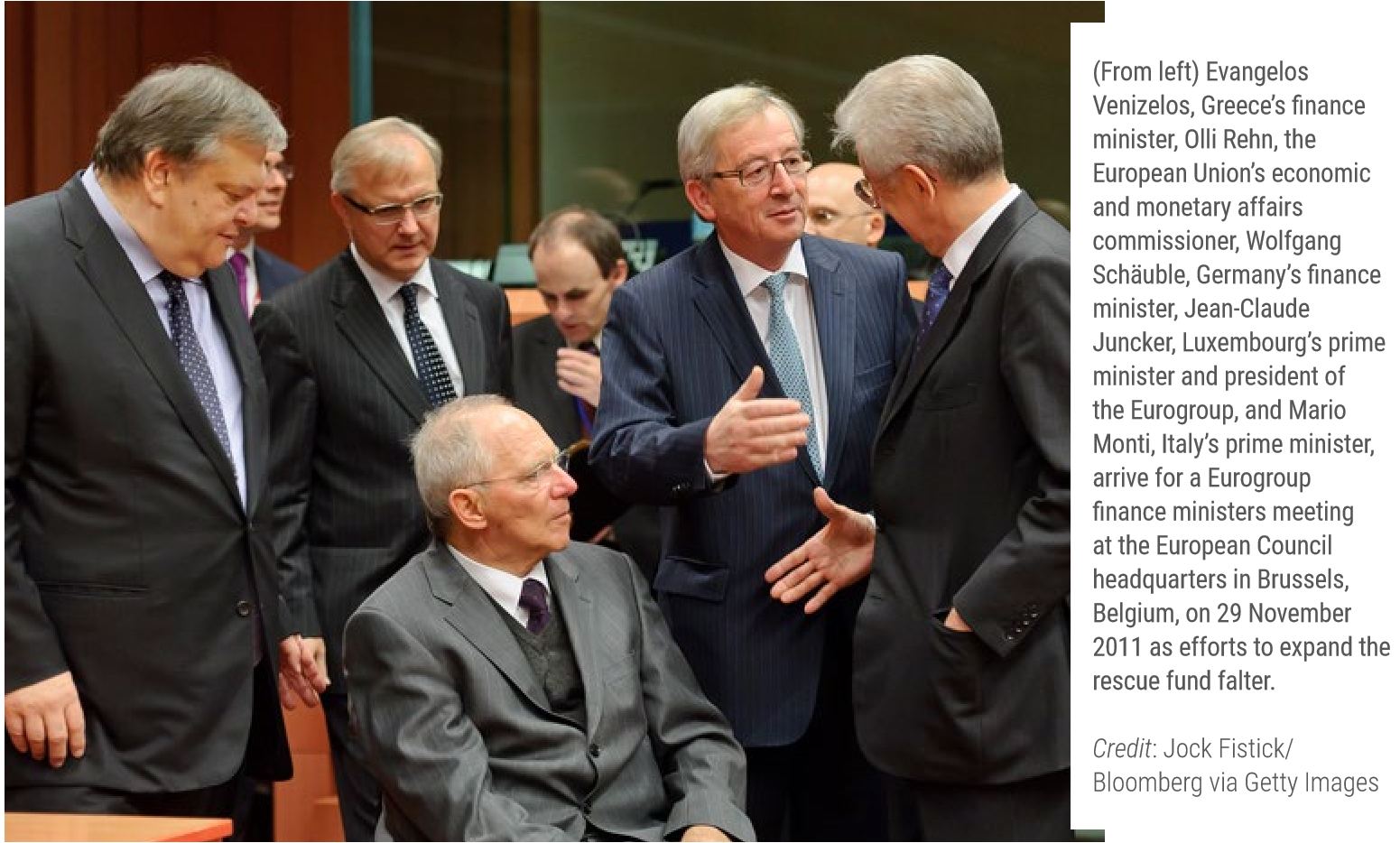 Both leverage options could be combined with other rescue instruments, but unlike other EFSF tools, they wouldn’t be taken over by the ESM. At their debut, however, they were an anchor point for the euro area strategy. The next summit, on 9 December 2011, vowed that they would be ‘rapidly deployed’[8], and the two vehicles were declared ready for use in February 2012[9]. But the leverage vehicles would later be dissolved, unused, even though investors had expressed interest in cooperating on their financing.
By the following year, the crisis – and the response – would move on, as centre stage shifted to more overarching decisions on economic governance and crisis management also taken at that same 9 December summit. These actions, as so often in policymaking to stabilise the euro area, reflected a compromise between the interests of creditor and programme countries by acting on two fronts, crisis prevention and crisis response.
On the governance front, the leaders toughened the euro area’s fiscal rules by committing to a new pact – eventually known as the Treaty on Stability, Coordination and Governance in the Economic and Monetary Union[10] – that enshrined the pursuit of balanced budgets in national law and committed euro countries to closer economic coordination. While open to countries outside the euro area, the fiscal compact[11] was binding on the common currency countries and the additional EU countries that opted in. Twenty-five of the then 27 EU countries signed it in March 2012[12].
As Regling explained, the push for more effective rules meant that ‘national governments will remain in charge and accountable, responsible for their fiscal and structural reforms. However, reforms need to be better coordinated and must work better than in the past.’
The commitment to enhanced fiscal stewardship, to be made at the constitutional level in most cases[13], was intended to help countries avoid the need for a rescue programme. The pledges also paved the way for a breakthrough on crisis management tools.
Moving beyond earlier steps to increase the EFSF’s firepower, the leaders announced at the summit that the launch of the ESM – then scheduled for mid-2013 – would be brought forward by a year, to July 2012.
‘The Treaty will enter into force as soon as Member States representing 90% of the capital commitments have ratified it,’ the post-summit statement said[14]. ‘Our common objective is for the ESM to enter into force in July 2012.’
The planned speedier introduction of the ESM reshaped the course of crisis management. Although that timetable would slip by a few months, the move was still a decisive step forward that unshackled the rescue effort from the EFSF’s guarantee structure. Equally important to getting the ESM up and running fast, the euro area sped up the delivery of the ESM’s paid-in capital, starting with two tranches in 2012 and concluding with the final tranche in 2014, a full four years ahead of the original schedule[15].
Critical features of the proposed ESM were modified as well. Amid lingering concerns in the markets that Greek bond writedowns, by then under negotiation, would set a precedent for future rescues, the leaders added language to the preamble of the ESM Treaty to reassure investors that the Greek solution was ‘unique and exceptional’[16]. Only in extreme cases, the summit statement said, would the ESM pursue private sector involvement, and then solely in accordance with ‘well established IMF principles and practices.’
Summit debate then tackled the requirement for unanimous decisions on loans to programme countries – a rule written into the first draft of the ESM Treaty. There was widespread recognition that, given the vagaries of national politics, the unanimity rule could hinder rescue efforts, especially when rapid intervention was called for. At the summit, the leaders added an emergency procedure to the ESM Treaty that would allow the granting of financial assistance over the objections of some of the euro area’s smaller members.
‘To ensure that the ESM is in a position to take the necessary decisions in all circumstances, voting rules in the ESM will be changed to include an emergency procedure. The mutual agreement rule will be replaced by a qualified majority of 85%, in case the Commission and the ECB conclude that an urgent decision related to financial assistance is needed when the financial and economic sustainability of the euro area is threatened,’ the leaders said[17].
Under the 85% threshold, Germany, France, and Italy, the ESM’s three largest shareholders, continued to have blocking powers. As Schäuble, then German finance minister, explained, this was essential for him to support the ESM.
‘Given the sums involved, someone has to take responsibility for them – namely the taxpayers in the member states, including the Germans with their 27% share in the paid-in capital,’ Schäuble said. ‘Parliament is accountable to the German taxpayers, and the finance minister is in turn accountable to parliament. Nobody can relieve me of this responsibility.’
Teixeira dos Santos, then Portuguese finance minister, said the shift to the 85% rule overcame ‘a serious limitation on the decision-making process – without which member states in crisis could see the approval of the rescue programme refused or delayed. That would further worsen the situation.’
Recalling the negotiations in the Task Force on Coordinated Action, Benjamin Angel of the European Commission said it took ‘several attempts’ to remove the unanimity rule. ‘It’s potentially good to have these procedures, even though we haven’t used them,’ he said.
Taken together, the ESM overhaul reflected lessons learned from two years of crisis fighting and gave the euro area a new toolbox for curbing contagion. Nevertheless, the new clause notwithstanding, it would still be hard for the euro area to press ahead with major decisions without consensus.
‘Just think of how difficult it was for certain smaller ESM Members to justify the Greek programme to their own populations,’ said Schäuble. ‘If all Members support a programme, then at least one important precondition is met in terms of achieving political acceptance in the monetary union.’