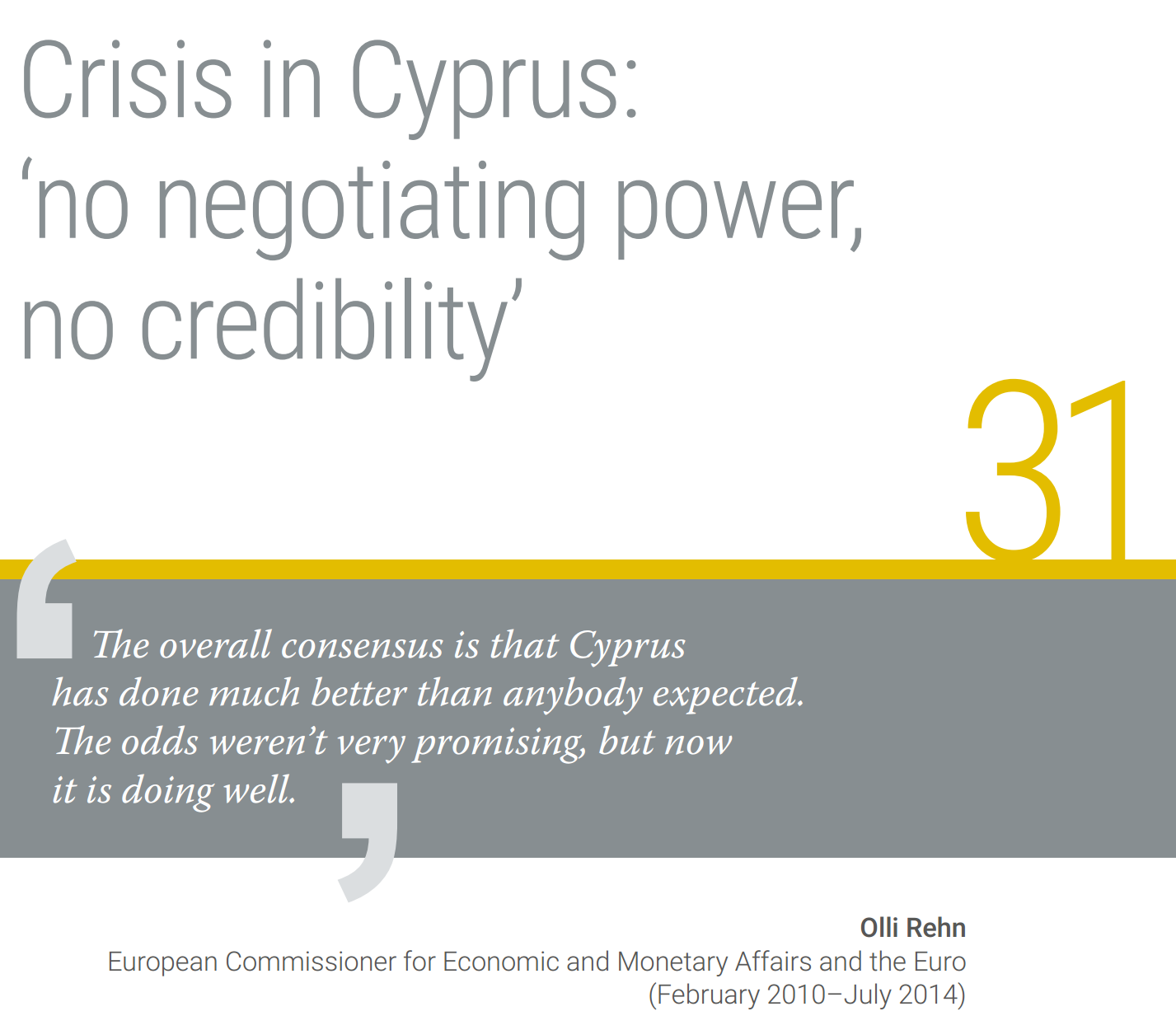 Cyprus was struggling with the broader ramifications of the crisis when the 2012 writedown of privately held Greek debt led to more than €4 billion[1] in losses for Cypriot banks, or in excess of 22% of GDP. With a banking sector that was then about six and a half times the size of the country’s economy, it was virtually impossible for Cyprus to overcome this blow on its own. Public finances also were deteriorating, with the debt-to-GDP ratio of 80% in 2012, compared with about 46% in 2008 on the eve of the crisis[2].

While harbouring reservations about the stigma and short-term economic hardship of an aid package, the government, headed by a communist president, formally sought a full macroeconomic adjustment programme with the EFSF on 25 June 2012 – the same day as Spain – but Cypriot pursuit of minimal conditions got in the way of a rapid agreement[3]. 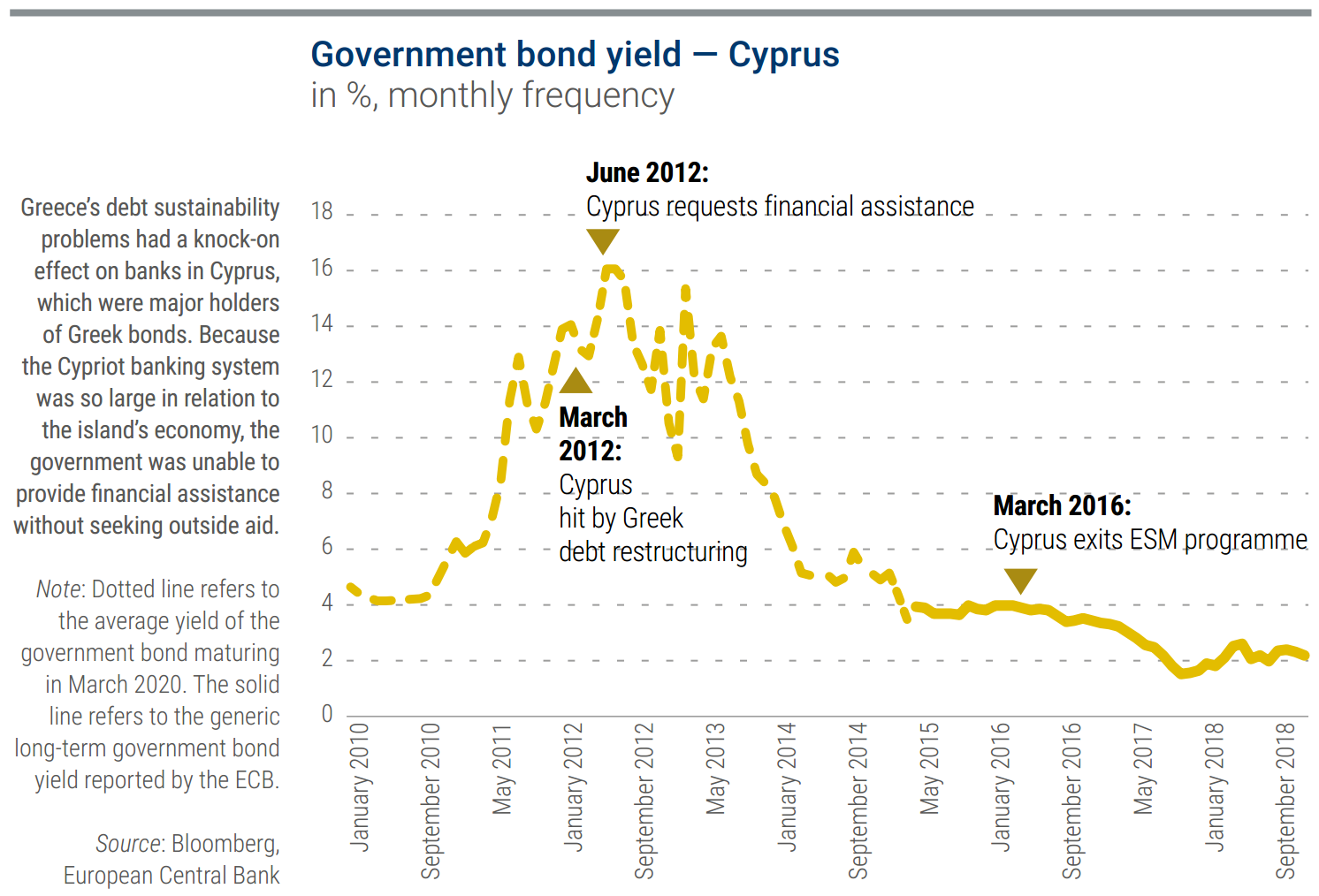 According to Michael Sarris, who would become finance minister for a short period after early 2013 elections, talks between Cyprus and what was then the troika of aid institutions focused on small issues instead of how to move forward. ‘We spent six months discussing things like a cost of living adjustment clause that the donors wanted to discontinue,’ Sarris said, describing talks in the second half of 2012. ‘In other words, details while the house was on fire.’
An agreement on conditions seemed close in November 2012, by which time the ESM was up and running. Juncker, then the outgoing president of the Eurogroup, said in early December that Cyprus was already taking the first steps to implement the draft agreement and he looked forward to its conclusion soon[4]. But by January 2013, talks had stalled. At its last meeting under Juncker, the Eurogroup announced that the programme would be delayed[5].
Discussions didn’t pick up speed until February 2013, when Nicos Anastasiades was elected president on a centrist platform[6].
When euro area finance ministers met on 4 March 2013, an accord appeared within reach. Now the Cypriot minister, Sarris outlined the government’s policy intentions. A post-Eurogroup statement praised the ‘useful’ presentation, looked ahead to the ‘swift conclusion’ of the negotiations, and pencilled in the end of March as the target for the political signoff on the programme[7].
That deadline would be met, but not in the way the Eurogroup envisaged. The final push was marked by political brinkmanship, Cypriot parliamentary opposition, the floating of Plan Bs, questions about Cyprus’s euro adherence, overtures to Moscow, and an extended bank holiday that left the 866,000-strong Cypriot population fearful for the future.
In hindsight, a Cypriot programme was inevitable.
‘The Cypriot government put us in a difficult spot by repeatedly refusing to apply for a programme,’ said Wieser, Eurogroup Working Group chairman during the crisis.‘They would have got off considerably cheaper, easier, and better if they had applied for a programme half a year earlier, or even a year earlier, as they should have.’
What made Cyprus different from previous programme countries was the size and skewed nature of its financial sector. Bank assets were 657% of GDP in 2012. Non-performing loans were high and would eventually reach around 50% of the loan book. Along with ordinary struggling borrowers, Cyprus had a class of strategic defaulters, who could pay but didn’t feel obliged to. ‘The legal framework was very debtor-friendly – if you didn’t pay your loan, the bank couldn’t do anything,’ said Sutt, then the ESM’s Cyprus mission chief. The haircut on Greek bonds exposed the system’s fragility.
Cyprus had tried to fix the problem on its own in May 2012, with an effort to bring in new capital of €1.8 billion for Cyprus Popular Bank, known as Laiki Bank[8]. In June, it became clear that Cyprus couldn’t raise the money privately so the government would need to provide the rest of the funds. The state aid was necessary because the bank had fallen short of meeting its minimum regulatory capital requirements as determined by the European Banking Authority, which in 2011 had started stress-testing banks across the EU.
In all, Cypriot banks were staring at a €8.9 billion shortfall in their balance sheets under an ‘adverse scenario’, according to an independent analysis that was conducted by the investment management firm PIMCO in late 2012[9]. 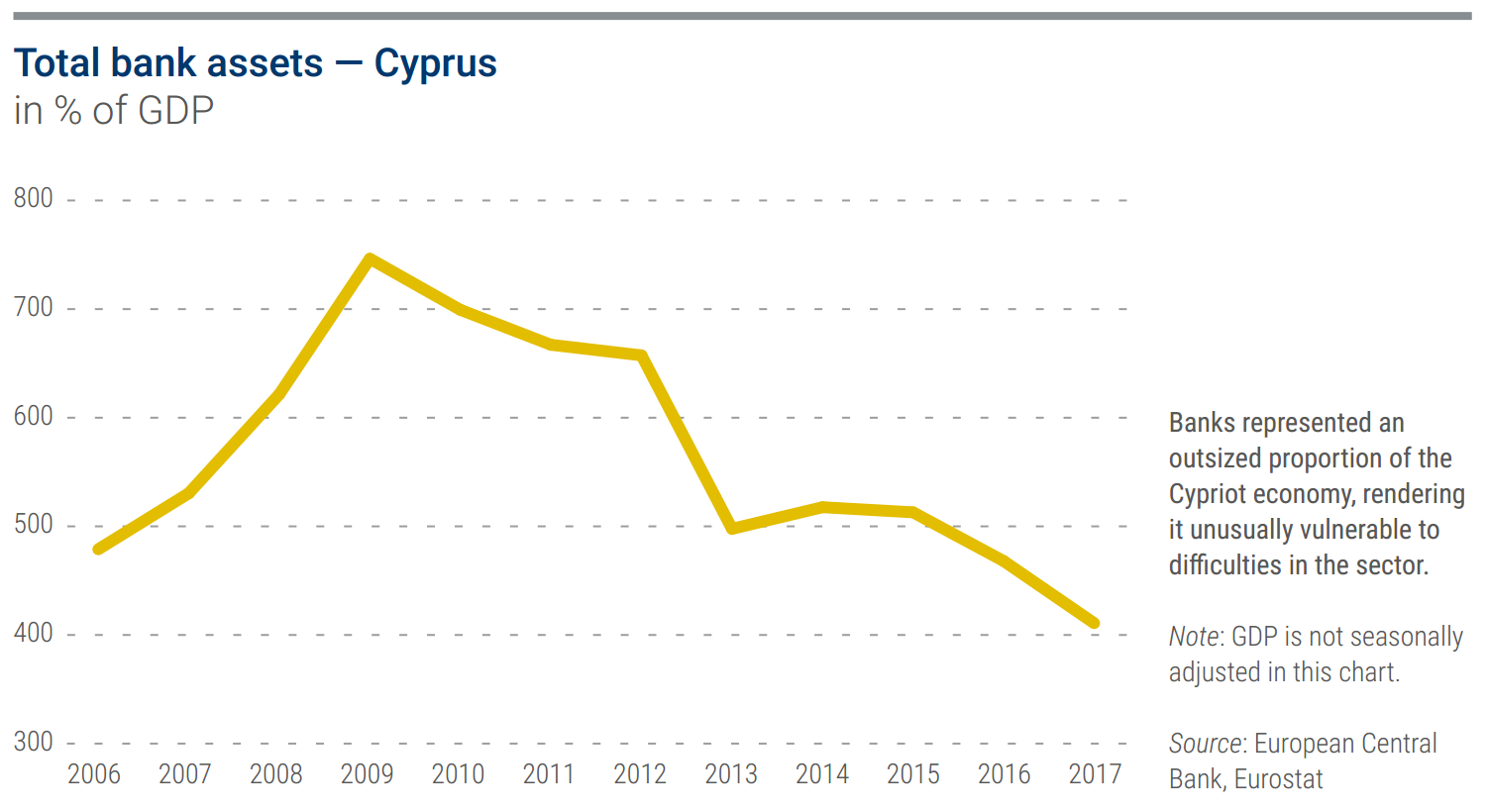 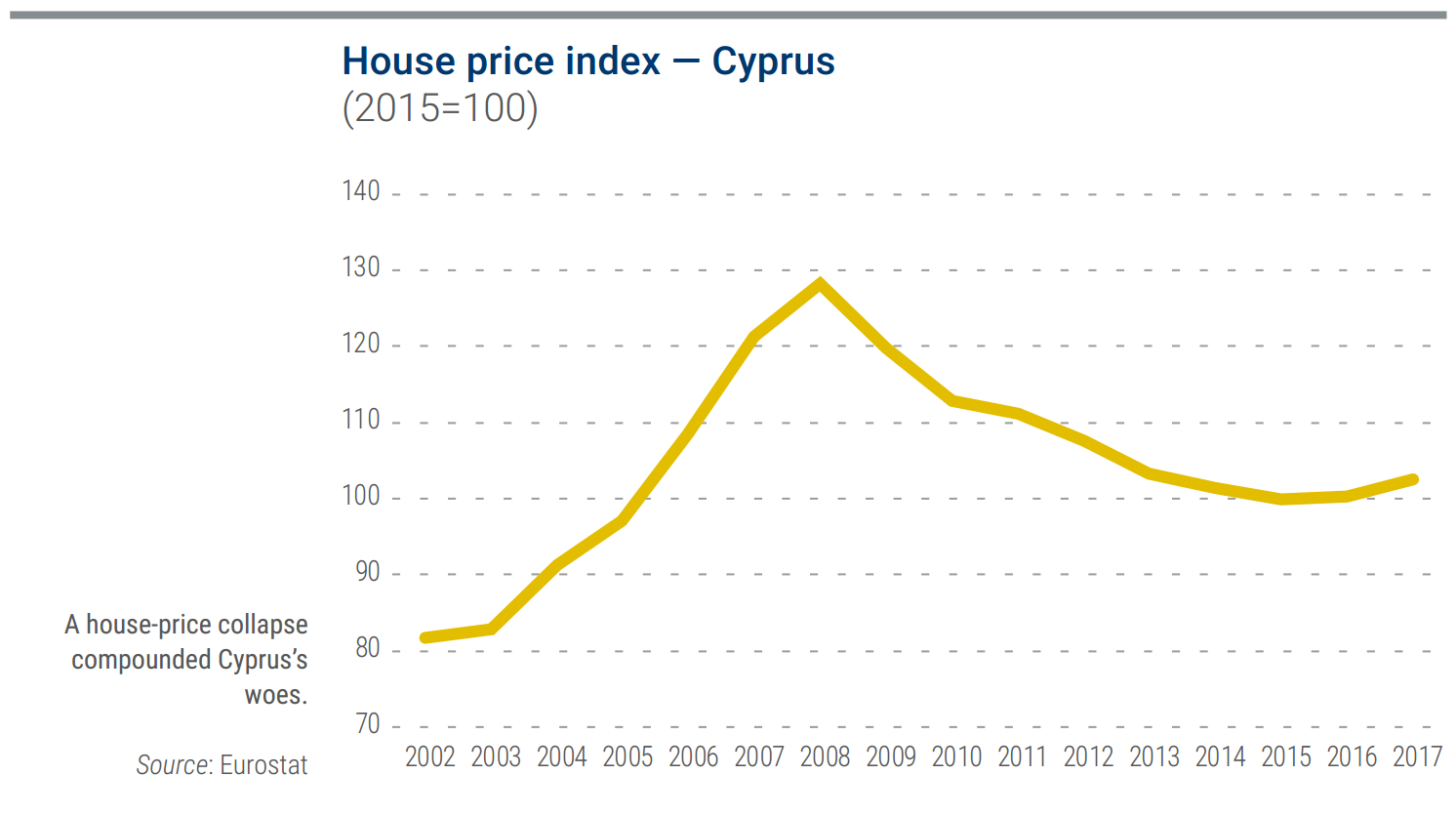 Cyprus tackled the task of whittling away at the rapidly accumulating debt. Once Cyprus was carrying out its programme, real house prices rose, a sign that homeowners were benefiting from the economic reforms. Its debt-to-GDP ratio peaked at 107.5%, a better outcome than expected, and the country progressed in overhauling its banks.
Fresh capital for banks, some of which came from the aid programme, brought a first glimmer of confidence. However, some of the efforts to stabilise the financial sector have proven tricky. The programme included €1.5 billion in capital to the country’s Cooperative Central Bank, but the bank later required another infusion of state aid after an ECB review found it wasn’t doing enough to manage non-performing loans[26]. The cooperative bank then came under increased scrutiny until 2018, when it was split up[27]. Parts of the bank were sold to a domestic competitor, while in particular the non-performing loans remained in a state-owned asset management company.
In the end, the capital controls did less damage than expected, because their implementation varied across different types of transactions in an attempt to minimise payment system disruptions and ensure the execution of transactions essential for the real economy[28].
‘One of the reasons why the capital controls did not disrupt the economy was that the programme included an efficient roadmap to remove them step by step once clear milestones in the programme were reached,’ said Paolo Fioretti, the ESM’s country coordinator for Cyprus. ‘A clear time horizon increased the commitment of the government in implementing related necessary measures and gave people more confidence that the controls would be transitory.’ 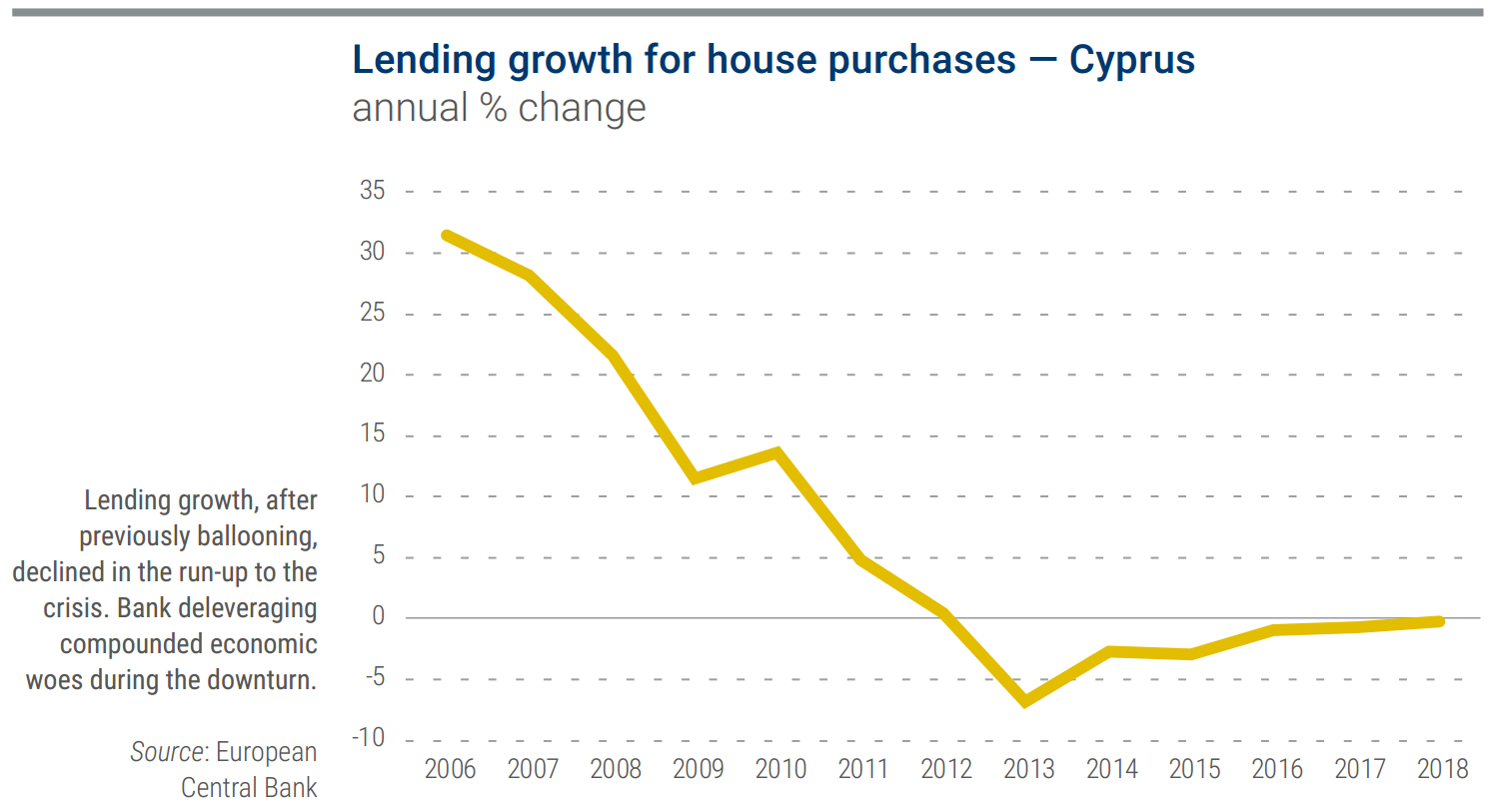 Overall, the programme strengthened the banks while also reining them in. ‘In the end, the banking sector benefited too,’ said Sutt, a veteran of the IMF and the Estonian Central Bank. Cyprus Popular Bank was shut when its troubles became too big to fix. Meanwhile, the largest Cypriot bank became de facto foreign controlled, as did the third largest, bringing new incentives for the banks to improve governance, work better with the government, and lend in a way that helps the overall economy. ‘The shareholder structure changed dramatically. It helped to change the governance and the links between the banks and the entrepreneurs, and the politics,’ Sutt said. ‘In the end, I think it’s a positive for a country. But these exercises are, at the time, never easy in terms of implementation.’
The programme in Cyprus benefited from strong cooperation with local authorities, once it was finally underway. ‘In March of 2013, Cyprus was in a difficult position. Most of the adjustment efforts had to come from the Cypriot population. Now, we see that the approach has brought good results,’ Fioretti said. 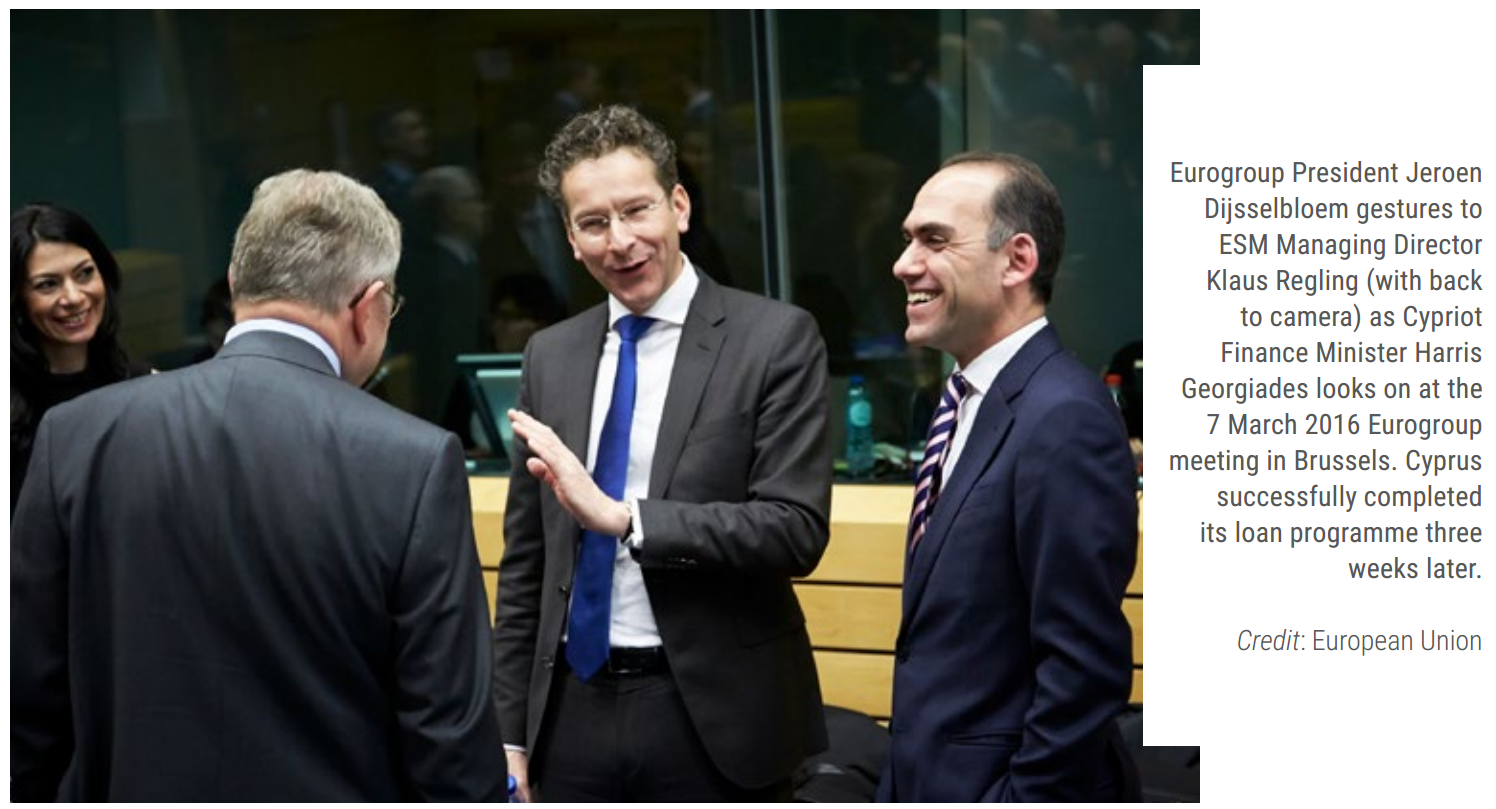 Cyprus lifted all external capital controls on 6 April 2015[29]. In March 2016, Cyprus exited its programme on schedule, although it chose to leave €2.7 billion of the initial envelope unspent – in part because it was unable to meet a few of its last programme conditions by the time of the exit, and in part because financing needs turned out to be lower than initially estimated. 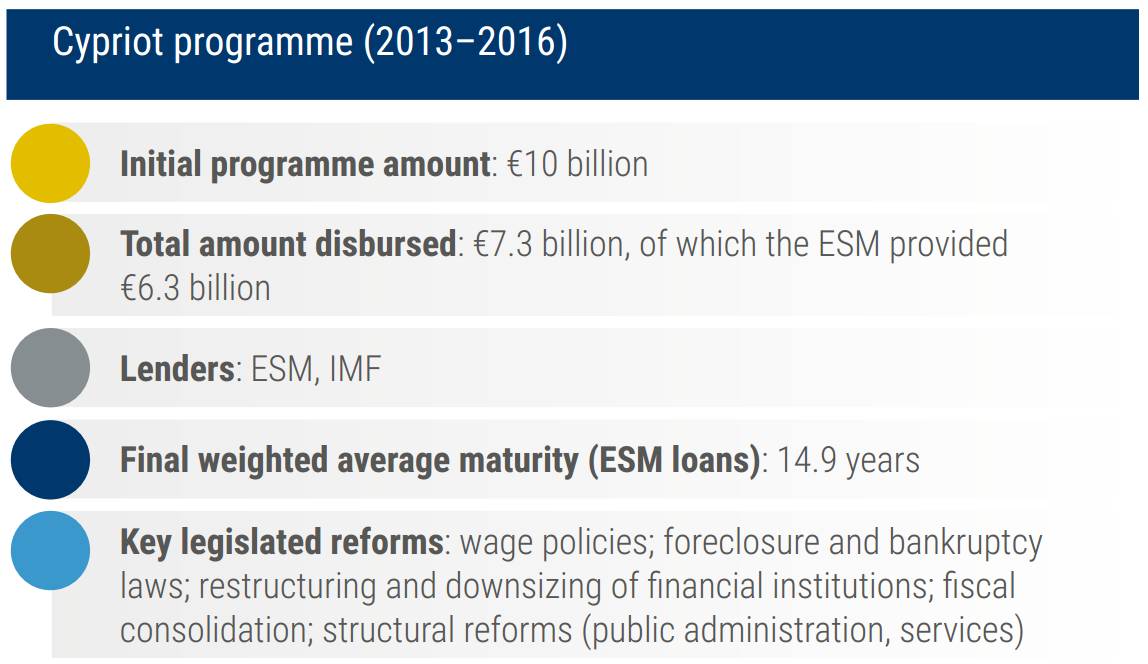 ‘Cyprus has managed to restore economic growth and repair public finances much faster than expected,’ said Juncker, now the Commission president.‘Overall, the experience in Cyprus confirms what we have seen in other programme countries: the strategy of providing loans to a country in a deep crisis in exchange for economic policy reforms is one that works.’