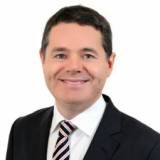 Function/Position
Eurogroup President, Chairperson of the Board of Governors, Minister of Finance
Country
Ireland
Date of appointment
June, 2017

Paschal Donohoe was elected Eurogroup President on 9 July 2020 by the euro area finance ministers and has served as Chairperson of the ESM Board of Governors in his capacity as President of the Eurogroup since 17 July 2020.

He was elected to Dáil Éireann (Irish Parliament) in February 2011 representing the constituency of Dublin Central. Prior to his election, he was a member of Seanad Éireann (Irish Senate) from 2007 to 2011. He served as member of Dublin City Council from 2004 to 2007.

He is a graduate of the University of Dublin, Trinity College, with a degree in Politics and Economics.