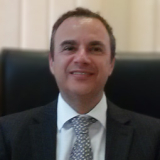 Mr George Panteli is the Head of the Economic Research and European Union Affairs Directorate, of the Ministry of Finance of Cyprus. His main responsibilities include the analysis of macroeconomic developments/economic policy/fiscal and taxation policies and the coordination of issues related to the European Union affairs.

He is the Cypriot representative in the Economic and Financial Committee of the European Union and the Euro Working Group of the Euro Group.

Mr Panteli graduated from the Queen Mary University of the University of London in the United Kingdom, in the field of Economics.

Ministry of Finance of Cyprus