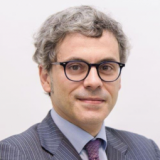 Function/Position
Director General of the Treasury
Country
Italy
Date of appointment
August, 2018
Prior to his current position, Alessandro Rivera was Head of Directorate for Banking and Financial System at the Department of the Treasury of the Ministry of Economy and Finance from 2008 to 2018. Previously, Mr. Rivera served as Head of various Units in the Directorate for Banking and Financial System from 2000 to 2008.

As Director General of the Treasury, Mr. Rivera represents Italy as a member of working groups and committees set up by leading international financial organizations. He is the representative for Finance Deputies meetings of the G7, G20, and the IMF, and a member of the Economic and Financial Committee and the Euro Working Group of the European Union.

In the past, he represented Italy in several international working groups and committees dealing with financial sector policy and regulation.

In addition to his responsibilities at the Ministry, Mr. Rivera is the President of SGA S.p.A, and a member of the Board of Directors of Cassa Depositi e Prestiti and of the Supervisory Board of STMicroelectronics.